We are working very hard to keep this story in the news, here’s a list of our press coverage to date (for media enquiries please CONTACT US): 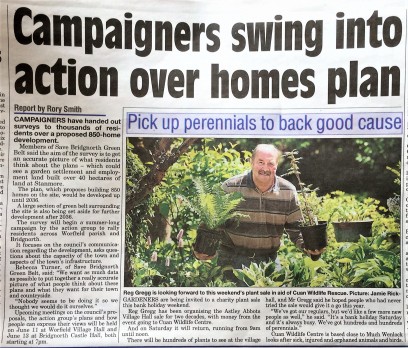 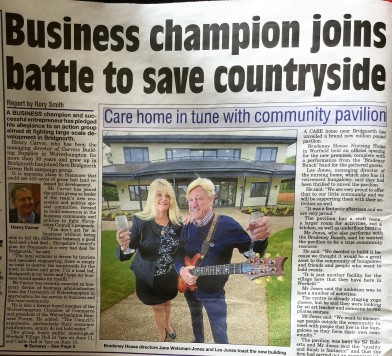 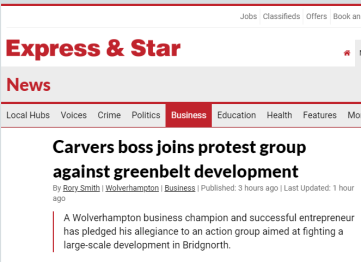 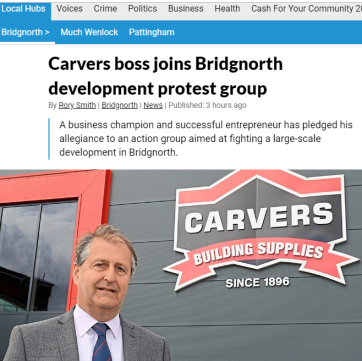 Shropshire Star, 10th April 2019 “Shropshire councils split over housing request”
to take black country overspill.  Council CEO Clive Wright said, “Given the geographical proximity of parts of eastern Shropshire to the Black Country, we recognise that there is merit in further discussion about the potential for Shropshire to help meet cross boundary needs from the Black Country.”

Shropshire Star, 8th April 2019: “Shropshire Council criticised for advertising land to developers”
Sheila Edwards, chairwoman of Save Bridgnorth Greenbelt said, “Shropshire Council is totally out of control. Seeking investment for Greenbelt sites on a junket in Cannes means they have pre-determined the future of these sites before the next round of consultation. That is not only undemocratic but supremely arrogant …We are imploring local residents to contact Philip Dunne MP and Bridgnorth Town Councillors urging that the light of scrutiny is shone on Shropshire Council before Bridgnorth is wrecked … Residents should not suffer the insult of finding the place they call home being peddled abroad in a real estate brochure or be forced to rely on freedom of information requests to get straight answers.”

Shropshire Star, 19th March 2019: Bridgnorth Chamber chief denies backing for more homes
“Asked last month if companies had come forward to raise their concern, Adrian Cooper, planning policy & strategy manager for Shropshire Council: “Yes, through things like the chamber of commerce and the LEP, these are what spurred the concerns. This is an issue that pertains to the local economy in Bridgnorth.”

However, Mr Robbins has insisted that the chamber has not lobbied over the issue.

He said: “I would like to make it very clear that Bridgnorth Chamber of Commerce have not received any comments from its members or other businesses concerning a need for housing or additional employment land in the town.

“Furthermore, we are advised that Shropshire Chamber of Commerce and Trade, as our parent chamber, have received no such comments either, and neither chamber has made any representations to Shropshire Council on the matter, as alluded to by one of its officers.  As chairman of Bridgnorth Chamber of Commerce I find myself frustrated by the inaccurate information emanating from this council, particularly where it promotes a negative impression of the chamber which works very hard for the town, its businesses and residents.”

“Now, the council is citing broader issues that apply anywhere in the county, there’s nothing unique to Bridgnorth, but we’re meant to believe that the destruction of our countryside and swamping of our town is justified by an unseen, unfinished economic plan; unseen, inadequate housing data and a secret ‘dodgy dossier’ of concerns the business community has never heard of.” 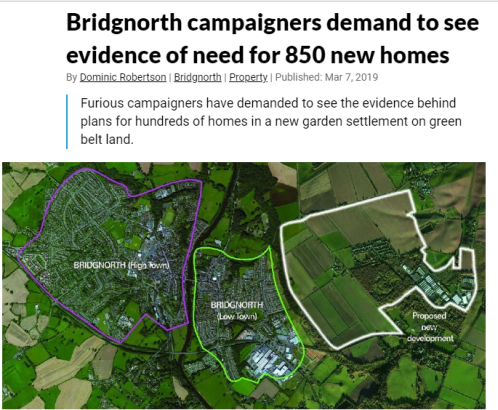 She added: “Any fair-minded council would put all evidence into the public domain to be properly scrutinised before consultation – it speaks volumes they can’t, or won’t, do that.

“People have completely lost faith in Shropshire planners, it’s quite clear their crackpot scheme for Bridgnorth has been pulled out of thin air.”

Shropshire Star, 28th February 2019: Shropshire campaigner warns proposals will mean population to grow by 75,000
Charles Green, a planning spokesman for the Shropshire branch of the Campaign for the Protection of Rural England, said Shropshire Council’s proposals for development in the county would have a huge impact … The plans include large settlements and expansions for Bridgnorth and Shifnal, which have sparked a strong reaction from local residents and the formation of campaign groups to oppose the proposals.

Shropshire Council has argued that the plans are required to prevent developers from being able to build where they want in the county.  The council’s planning expert Adrian Cooper has also said they will prevent towns falling into decline.  Mr Green has questioned the scale of the proposals, which he says do not factor in the prospect of huge ‘one-off’ development sites at Tong and Ironbridge Power Station, which could include another 10,000 homes.  He said: “Shropshire Council’s spokesman Adrian Cooper thinks that homes in the green belt next to Bridgnorth are a necessary evil, in order to save it from speculative developers, to prevent it from declining, and to keep up the availability of jobs.  In Shropshire as a whole Mr Cooper and the council want to see 28,750 new houses built between 2016 and 2036, to achieve this “necessary evil”.”

Mr Green said that the plans would outstrip the current predictions of population growth for the county by a considerable margin …  “Does anyone other than Shropshire Council bosses and the development sector really think that we need another 75,000 people in Shropshire in order to improve the lives of the people who currently live in Bridgnorth and elsewhere around the county?” 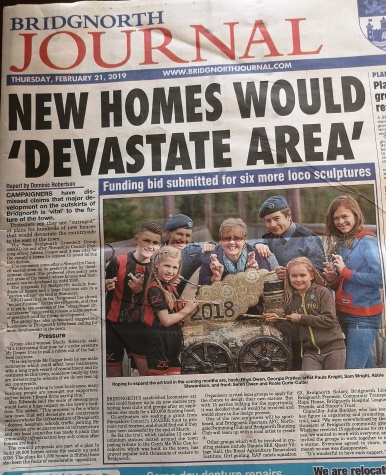 Bridgnorth Journal, 21st February 2019
This is significant and extremely welcome. The Bridgnorth Journal has taken an editorial position. Calling the Council’s plans for Bridgnorth ‘grandiose’ it points out the ‘elephant in the room’ that is Telford. It concludes, “Let us be clear here: we are certainly not against development. We merely want to see greater focus on two things: jobs and infrastructure. Put these in place and then you can think about releasing parts of the green belt for housing. Not the other way around”.

-Shropshire Star, 19th February 2019: “Campaigners hit back at devastating housing claims”  read online HERE
The group has also questioned suggestions that businesses in Bridgnorth have been calling for more development in the town.  Group chairwoman, Sheila Edwards said: “It’s interesting that now he’s under pressure Mr Cooper tries to pull a rabbit out of the hat – local business. It is deplorable that Mr Cooper feels he can make comments which could affect local businesses, with a long track record of commitment and investment in this town, somehow implying they are threatening to relocate if we do not tear up our countryside. We’ve been talking to local businesses, many business people are amongst our supporters, and we haven’t found firms saying this.”

Mrs Edwards said the scale of development would have a huge impact on the town’s facilities.  She said: “This proposal is for a whole new town that will devastate our countryside and overwhelm the infrastructure of Bridgnorth – doctors, hospital, schools, traffic, parking. Mr Cooper can give no guarantees on infrastructure and our local councillor has made it plain that community infrastructure levy only comes after houses are built – and as Shifnal and Broseley show, it’s not always spent where the houses are built.”

You can read our reply to these misleading claims here: Council’s claims? Our Reply